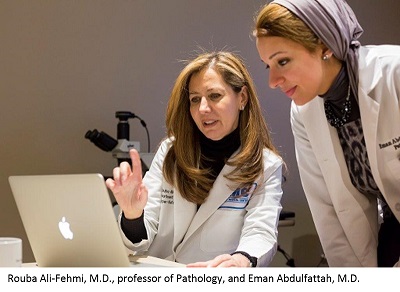 A Wayne State University School of Medicine professor and her protégé have won the 2018 Award in Surgical Pathology from the United States and Canadian Academy of Pathology.

"It's a great pleasure and an honor to receive this award," said Dr. Abdulfattah, who received her medical degree from the University of Alexandria (Egypt). "This work has a great potential to guide management decisions for patients with endometrial cancer at the time of diagnosis."

Dr. Ali-Fehmi said, "It's a great honor to receive the Stowell-Orbison Award. It is a team work. We have a great pathologist who worked with us, Dr. Sudashna Bandyopadhyay (also a pathologist with KCC), and outstanding residents, research assistants and students. This work is in partnership with our molecular genetics pathology division (Drs. Gerald Feldman and Erin Wakeling). This study will help avoid under- or overtreatment for endometrial cancer patients."

The physicians explained that current risk stratification systems used to guide management of endometrial cancer are based on post-surgical pathological information, including grade and histologic subtype. But pathologists are unable to reproducibly diagnose grade and histologic subtype, and there is a need for a more reliable classifications systems to guide clinical treatment.

The Cancer Genome Atlas research network recently identified four molecular subtypes of endometrial cancer. Each of the subtypes are associated with different clinical outcomes, so identifying them has the potential to provide prognostic and predictive information for physicians and their patients. However, this classification system was based on hysterectomy specimens, which are collected late in the cancer management process. Performing molecular tests on endometrial biopsy specimens would provide patients and physicians valuable information that would guide decision-making at the time of diagnosis.

The study conducted by Drs. Ali-Fehmi and Abdulfattah sought to determine the level of match between endometrial biopsies and subsequent hysterectomy specimens in assessing the molecular classification as well as the histologic subtype and grade.

"We had a high level of concordance between biopsy and hysterectomy specimens for the molecular subtypes, superior to that of grade and histologic subtype, providing earlier and more reliable prognostic information to inform clinical management," Dr. Abdulfattah said.